The offshore supply vessel (OSV) industry has emerged from its 2017 trough, thanks in large part to a slight shrinkage of the active fleet, a string of debt restructurings, improved cost management, and an uptick in drilling activity in a few regions. 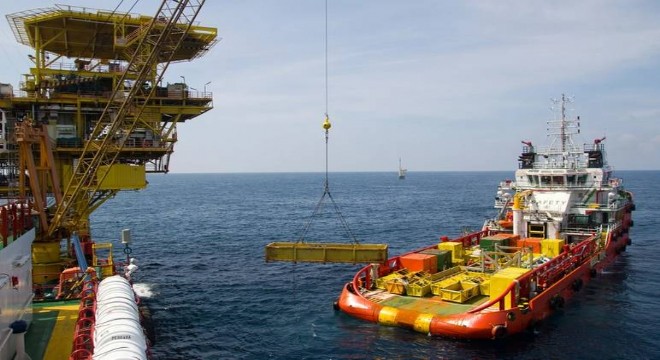 The industry is far from healthy, though, and the climb back to financial well-being will likely be long and unsteady. Not every operator will survive. And even though we’ve seen some improvement from 2017 levels, leverage ratios remain sky-high, the supply of vessels far outstrips demand, and—most crucially—the price of oil remains volatile. In the face of that acute price uncertainty, oil majors remain reluctant to commit to new long-term offshore projects, which has stifled demand for charters in all but a few regions.

Our view of the industry’s condition has altered in one respect since last year: facing the prospect of a prolonged and muted recovery—and the near certainty that the industry’s most-prosperous days are behind it—a handful of companies have launched aggressive, far-reaching measures in order to remain financially viable. The measures the most-forward- looking operators have undertaken include reducing debt, reining in general and administrative (G&A) expenses, and retiring older, smaller vessels to align supply more closely with demand. Some of those benefits have been realized through industry consolidation and merger and acquisition (M&A) activity. Time is running out for other operators to follow suit. Lenders, bondholders, and equity holders must also consider their positions in light of the sector’s uncertain prospects and its history of subpar financial returns. 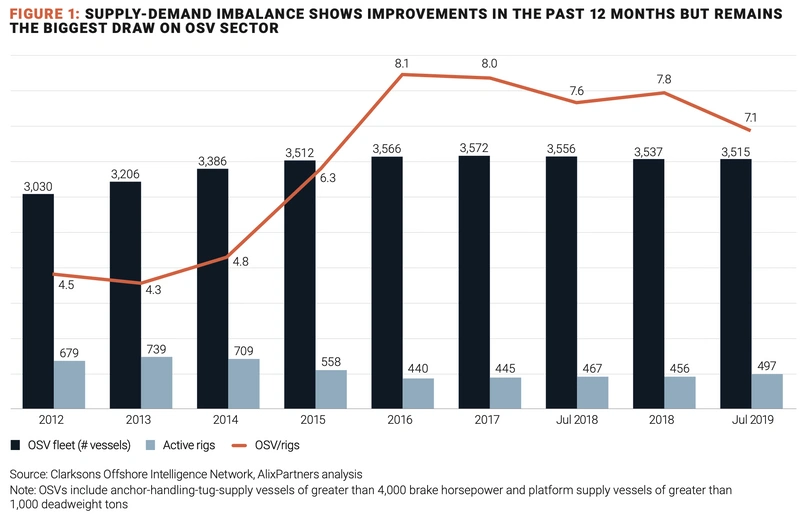 Drilling activity increases, but not enough
The past two years have seen a slow but steady increase in overall global rig demand. From a low of 440 rigs in 2016 (a count that implies a ratio of OSVs to rigs of 8.1x), the number of rigs grew to 497 as of July 2019, as against a total estimated fleet of 3,515 vessels. That makes for an OSV-to-rig ratio of 7.1x—an improvement, but still significantly below the peak ratio of 4.3x, reached in 2013 (figure 1).

The ongoing oversupply of vessels will continue to hinder the sector’s recovery until it is addressed adequately. From a peak of 3,583 OSVs in September 2017, the sector has seen only minimal reductions in overall OSV fleet capacity. Taking new build deliveries and scrapped vessels into account, total fleet capacity decreased to 3,515 OSVs in July 2019—a reduction of only 68 OSVs, or 1.9%, in the two-year period. Assuming that all 210 vessels in the current order book are delivered and scrapping rates are maintained at current annual levels of about 70 vessels, the OSV fleet would grow to 3,558 vessels by December 2021. Assuming a 4.5x OSV-to-rig ratio and a sustained fleet of 550 working rigs, the fleet’s projected overcapacity would be equal to nearly 1,100 vessels, or 30% (figure 2). 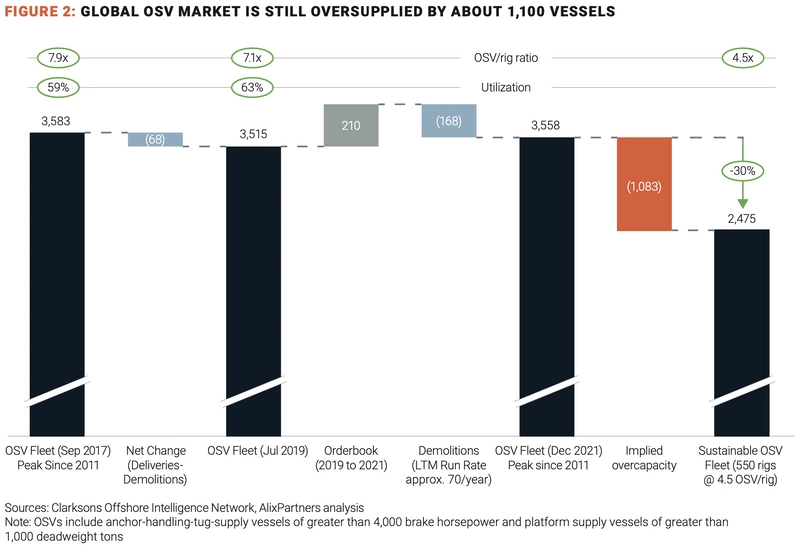 Current scrapping levels barely make a dent in overcapacity
The outlook for the OSV sector cannot improve until the bulk of the sector’s excess capacity is permanently eliminated through scrapping. Demolitions increased to 71 vessels in 2018 from a low of 15 vessels in 2011, but if the current trend continues, it would take more than 15 years to remove the estimated supply overhang of 1,100 vessels. Those numbers are illustrative only, but they clearly suggest a chronic imbalance in OSV supply, which to date, operators have done little to address. Scrapping activity, however, might accelerate in coming years. Before 2016, demolition and removal activity ran at 60 to 70 vessels per year, or 1.7% of OSV feet. Since 2016, the industry has posted a sharp increase in demolitions, whereby increases of more than 40% in scrap prices from 2016 through 2018 gave operators a strong incentive to permanently retire parts of their fleets—in particular, older, smaller, less- efficient vessels (figure 3). 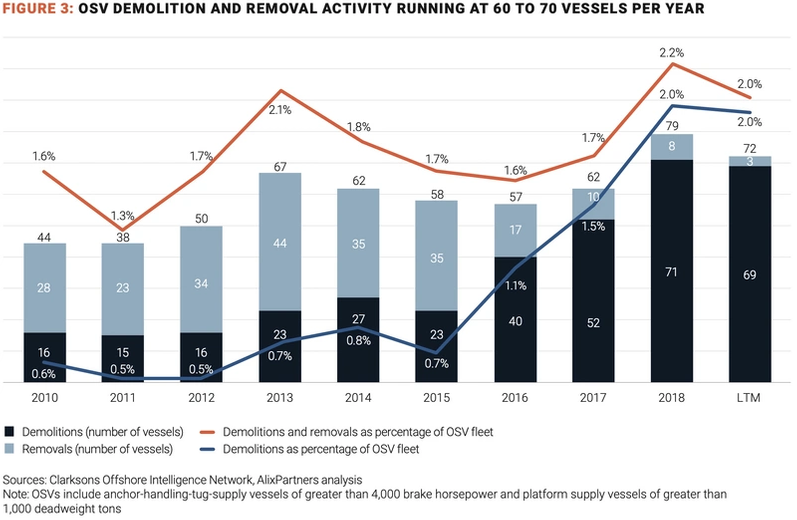 To date, Tidewater has taken the most active approach to rightsizing since expanding its fleet with its July 2018 acquisition of GulfMark. Tidewater accounted for 46% of the 24 OSVs scrapped during the first half of 2019; 90% of those vessels were aged 15 years or less. The remaining 13 OSVs scrapped by eight different operators during the same period were 32 years old on average.

Larger reductions in the oversupply of vessels, however, are unlikely as long as the OSV sector remains highly fragmented. The 10 largest operators in the sector control only about 30% of the total OSV fleet; the remaining 70% is in the hands of some 400 smaller operators, whose average fleet size is 6.1 vessels (figure 4). There is no reason to expect the smaller operators to take collective action for the benefit of the sector as a whole. 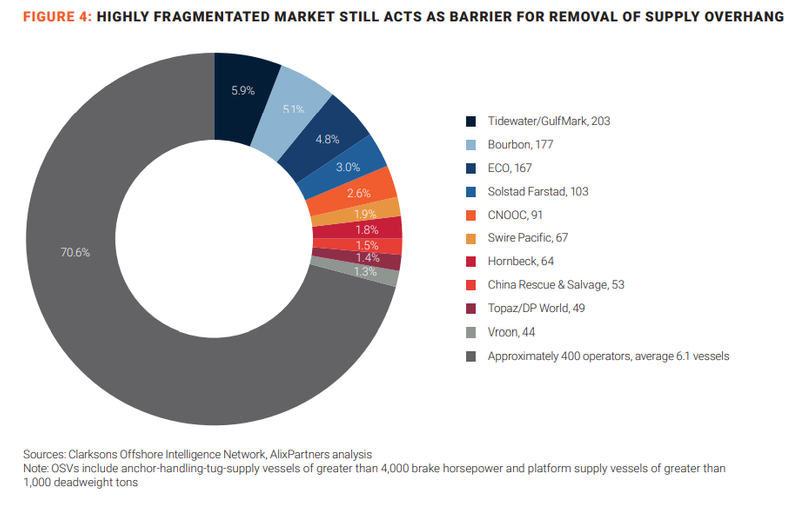 Moving in the right direction — but slowly
The OSV industry’s revenue base has shrunk drastically since 2014, when shale supplies came on the market in force and severely curtailed offshore activity. Sector revenues in the 12 months through July 2019 totaled $5.9 billion—down $9.0 billion, or 60%, from 2014’s peak (figure 5). EBITDAR1 margin declined in 2017 to its lowest levels over the past 18 years, half the margins posed from 2010 through 2015. Note, however, that when two large, deeply distressed operators—Bourbon Offshore and Ezion Holdings—are removed from our 40-company data set, sector EBITDAR margin improved to 23% over the 12 months ended July 2019, compared with deterioration to 10% when both operators are included in the sample. A combination of higher day rates and utilization levels drove the improvement in margins since the low point in 2017. 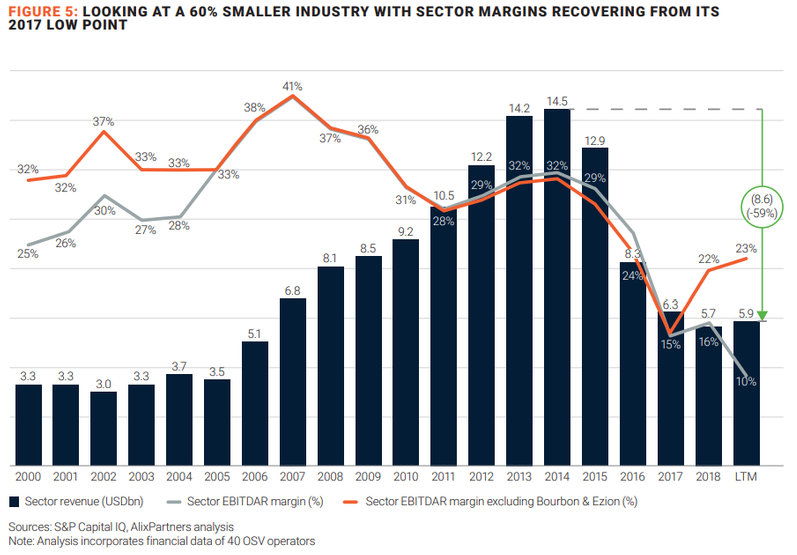 Capital discipline and restructuring activities reduced sector debt levels by about 30%, or $7.5 billion, since the market downturn, with total adjusted debt, including capitalized operating leases, standing at $19.5 billion. When Ezion’s and Bourbon’s results are excluded, the adjusted debt-to-EBITDAR ratio improved from 24.4x in 2017 to 13.1x in the 12 months ended July 2019, compared with an average of 5.0x from 2000 through 2015. The industry remains under significant financial strain, but it is in notably better shape than it appears to be when Ezion’s and Bourbon’s results are included (figure 6). Further financial restructurings seem unavoidable.

Vanishing capital
The numbers also paint a sobering picture for OSV owner/operators and equity holders. The sector has been a capital sink, earning less than its cost of capital (assumed to be in the range of 6 to 8%) every year since 2009 (figure 7). Later, this report tells how operators can earn positive economic rents by way of an ambitious but achievable suite of operational and financial improvements combined with an uptick in drilling activity and day rates. 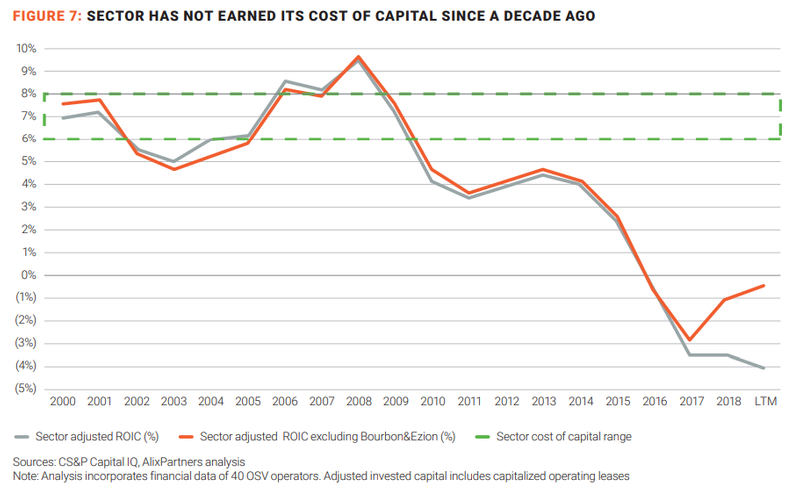 Securing a more stable recovery
Although the confluence of improved demand and a somewhat smaller fleet has helped the offshore supply market emerge from the trough and into the recovery stage of the market cycle, the path to a more stable and sustained recovery could be a long one. By any measure, the market remains fragile, and an indicative financial analysis of the sector suggests that further restructurings and other improvements are imperative. More specifically, putting the sector on a sustainable financial footing—with a return on invested capital (ROIC) greater than its cost of capital—would require sector utilization and day rates to improve to 2013–14 levels, which seems unrealistic given the current supply overhang of 1,100 vessels.

As a result, a suite of market factors and controllable factors must be addressed to reach a sector ROIC of at least 6% (figure 8). 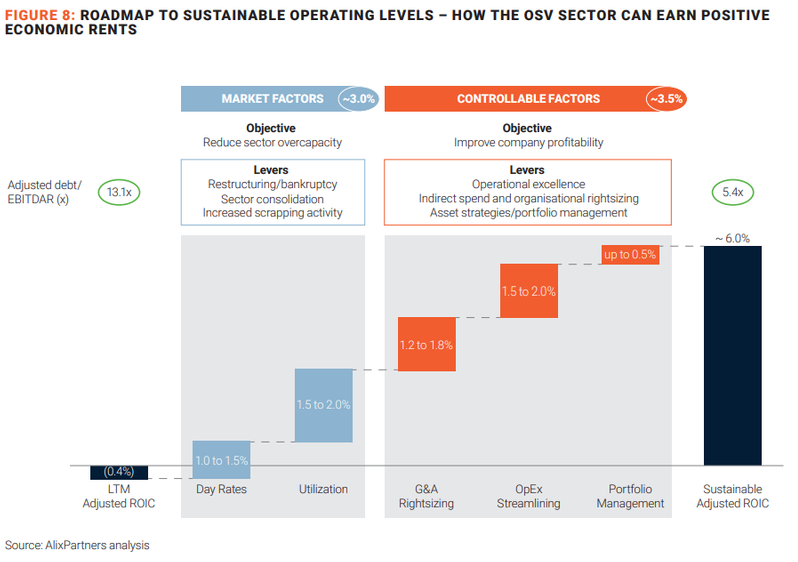 Controllable factors
In the absence of such dramatic shifts, however, OSV operators and equity holders can improve their lot by focusing on costs, operational performance, and asset deployment, which are firmly under their control.

If market factors improve as described and controllable factors get addressed effectively, sector leverage as measured in adjusted debt-to-EBITDAR would decrease from its current level of 13.1x to a healthy, 5.4x, which would be in line with the long-term average—and would earn positive economic rents for equity holders. None of the market factors or controllable factors, however, can by themselves put the sector back on a more sustainable financial footing.

Aggressive action that tackles the sector’s operational and financial issues will require all sides to make difficult trade-offs. But it’s better to start that process now than wait until another crisis forces their hands.

The year in restructures
Financial restructurings have enabled the industry to take at least tentative steps toward reducing market fragmentation and vessel oversupply. One of the most notable recent restructurings involved Harvey Gulf. In 2018, the company emerged from a prepackaged Chapter 11 filing into a significantly enhanced liquidity position.

(In a prepackaged Chapter 11 filing, all stakeholders, including institutional creditors, agree to a reorganization plan before the case is filed with the US Bankruptcy Court, with the aim of reducing the amount of time the debtor remains under bankruptcy-court protection.) Harvey Gulf’s spell in Chapter 11 lasted 77 days, during which time senior lenders swapped the debt they held for common stock (or warrants, in the case of foreign lenders subject to the Jones Act, which sets a ceiling on foreign equity investments in US vessels). The swaps had the effect of cutting the debt on Harvey Gulf’s balance sheet to $350 million from $1.2 billion, positioning the company to emerge from Chapter 11 transformed from a troubled victim of an adverse market into a potential consolidator.

Another recent Chapter 11 filing serves as a cautionary tale for operators. In 2017, after prolonged reorganization efforts had come to nothing, OSV operator Toisa Ltd. went out of business. Toisa’s 26-vessel offshore fleet was liquidated—bought by other operators that intended to reactivate the vessels shortly after purchase or keep them available for reactivation in the near future. Not a single vessel was sold for scrap, although some may eventually end up on the scrap heap because of their age and condition. The lesson for operators is twofold: not every operator will survive the current challenging climate, and restructuring alone will not solve the industry’s chronic oversupply problem.

Yet another large industry transaction is expected to have a positive effect on fleet utilization rates, though it won’t directly affect total global fleet size. Tidewater’s 2018 acquisition of GulfMark, valued at $340 million, created the world’s largest OSV operator, with 245 vessels. The combined company will be able to redeploy underutilized assets across its globe-spanning operating footprint, thereby reducing the number of idle vessels.