Having just completed a huge newbuilding programme, which saw a swathe of ultra-large boxships join its fleet this year, Cosco Shipping is already in discussions for a record, bumper new round of orders that will rock the liner community, acutely concerned about the delicate global supply/demand balance. 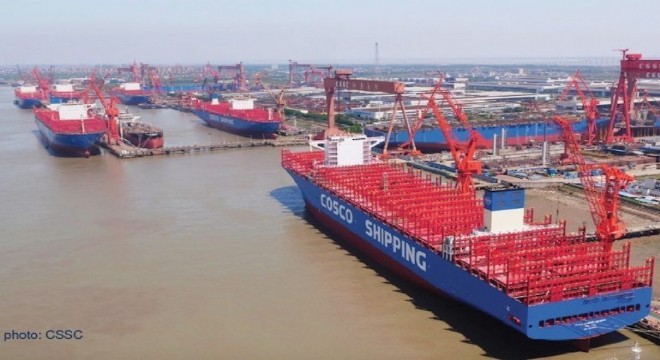 Splash understands Cosco is in advanced negotiations with yards in China for eight 15,000 teu ships and eight 23,000 teu vessels, orders that would be worth around $1.8bn in total and would add 304,000 extra slots to the Cosco fleet, cementing its position as the third largest carrier in the world.

Cosco declined to comment on the order speculation when contacted by Splash.

The current Cosco boxship delivery schedule is at its lowest point this century with six 1,800 teu ships under construction at Cosco Guangdong and two river ships at WUT Guangda.

The news will be greeted with shock from peers in Europe, with many of the world’s top containerlines such as Maeresk and Hapag-Lloyd urging for ordering restraint in recent months. Maersk, for instance, has no ships on order at the moment for the first time this century.

“With 10% capacity added to the cellular fleet in the last two years and an existing orderbook for 8.4% more, although this order does represent only a further 1.2% growth, it comes at a time of great trade growth uncertainty,” Lane said, musing: “But when China’s yards are hungry, maybe Cosco is not fully in control of its own destiny.”